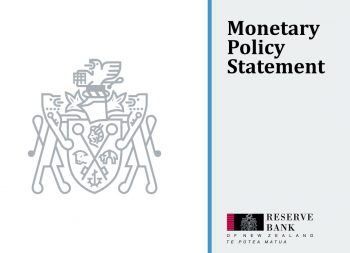 Reserve bank has a positive outlook

Stronger global demand has helped to raise commodity prices over the past year, which has led to some increase in headline inflation across New Zealand’s trading partners. However, the level of core inflation has generally remained low. Monetary policy is expected to remain stimulatory in the advanced economies, but less so going forward.

The trade-weighted exchange rate has fallen by around 5 percent since February, partly in response to global developments and reduced interest rate differentials. This is encouraging and, if sustained, will help to rebalance the growth outlook towards the tradables sector.

GDP growth in the second half of 2016 was weaker than expected. Nevertheless, the growth outlook remains positive, supported by on-going accommodative monetary policy, strong population growth, and high levels of household spending and construction activity.

House price inflation has moderated further, especially in Auckland. The slowing in house price inflation partly reflects loan-to-value ratio restrictions and tighter lending conditions. This moderation is projected to continue, although there is a risk of resurgence given the continuing imbalance between supply and demand.

Monetary policy will remain accommodative for a considerable period. Numerous uncertainties remain and policy may need to adjust accordingly.

How our brains lose us money

6 mistakes our brains make every day, and what to do about them

7 reasons why your term deposits could be your worst enemy

A term deposit is one of the safest investments there are, though what’s little known are the risks and disadvantages of investing in term deposits.

What is a financial liability?

Five financial liabilities you don’t know you have